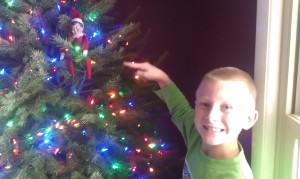 Jake is pointing to Buddy our elf

Jake and Spencer were so excited on St. Nick’s morning. They received the best gift ever – An Elf on The Shelf! They named their elf “Buddy”. The elf on the shelf is a more recent development in the Christmas Traditions. The story behind “Buddy” is that an elf comes to your house. The children cannot touch the elf or all of its magical powers are depleted. The elf watches the children and when they are fast asleep he/she flies off to the North Pole to report the day’s good choices as well as bad to Santa. The next morning the elf returns in a different spot in the house. The children may talk to the elf and tell him their Christmas wishes.On Christmas Eve when Santa brings his gifts and joy the elf hops in his sleigh and returns to the North Pole until the following Christmas Season begins.

My children love this new tradition. It is so much fun to wake up each morning and watch my little boys hunting the house for “Buddy”. I think the tradition began as a way to help monitor children’s behavior before Christmas. However, it has turned into a festive Christmas Tradition. Yes, it emphasizes Santa but it also rewards good behavior and acts of kindness.

As a child I always heard “You know Santa is watching you, Lori” for weeks before Christmas. The elf is a much more enjoyable way to say it. Does your family have an elf on the shelf?  If your family doesn’t your child should consider asking Santa to send you one. 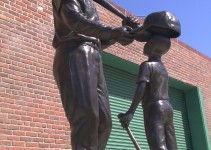 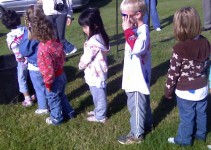 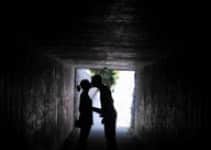