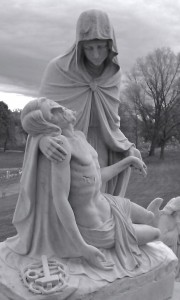 She was standing at the foot of the cross that Friday, she remembered holding Him in her arms when he was only a baby. The tears stung her eyes and her body ached for her son. She could barely stand. In her head she saw the past like flashes of lightening; the angel asking her, her Joseph not denying her, the long journey to Bethlehem, the visitors that paid homage to her infant, all the miles back home, holding him, loving him, letting him do His father’s work, asking him to trust and change that water to wine, the preaching, the traveling he did as she prayed for his safety, the pride she always felt in her son and his mission and now it all came to this…this torture…this pain…this humiliation he must feel…the blood and the anguish as he hangs there and I cannot save my baby boy, my child, my Jesus whom I loved before he ever left my womb. All should could do was weep and pray to God. She questioned God and that angel why if He is the son of God must He endure this…why? She never wanted to leave Him. She wanted to scream at those Roman soldiers “Take him down from there! Do you know what you have done?”She wanted to look away.

She wanted to just wake up from the horror of this nightmare that was happening before her. But all she could do was weep and pray. Then He looked to her with those loving, gentle eyes and she made eye contact with Jesus, her Jesus, and in that moment no one else existed it was just the two of them again, like it had been so many years before when he had scraped his knee and cried to her and her kiss was enough to heal him. He began to move his dried and parched lips as if to say something to her. At first she thought she was dreaming then as his voice penetrated her sorrow she heard him say to her with such tender compassion “Woman, behold, your son.” She was silent, confused and hanging on his every word. He broke eye contact with her to look over to his sweet disciple John and again he spoke “Behold your mother.”  And John held her tightly and in that moment she was his. In her mind she was screaming “NO, NO how can it be your time?” But she whispered not a word but listening intently for Jesus’ voice once more and she heard him say “I thirst” she wanted so badly to care for him to give him a drink, some comfort anything to ease his suffering. A solider held a sponge soaked with wine to his lips and he seemed to taste it. Then he said those final words “It is finished” and her son died right there before her eyes. In that moment her soul felt broken and her heart was completely torn in two, she could feel nothing but pain, she shook and she cried. She just wanted to hold him and help him and love him and now…now he was gone. She would never look upon his smiling face or hear his precious voice again. She was lost and falling all at once.  She heard nothing and saw nothing, until she felt them place her son’s body in her arms and she held him, Oh how she held him so tightly and kissed his cheek and caressed his face so gently. She hugged him and never wanted to let go. She rocked ever so slightly back and forth with him in her arms like she was rocking him to sleep as she did when he was just a baby. Her sweet boy, her Jesus lay dead in her arms that Friday. That Good Friday. 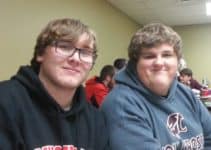 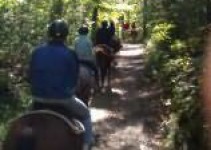