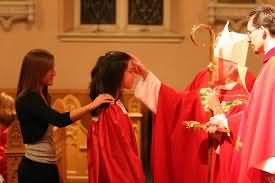 The Holy Spirit is the most neglected and misunderstood part of the Trinity. We understand that God the Father is the creator and Jesus Christ is the Son, savior, and the redeemer but what about the Holy Spirit? The First Pentecost in Acts of the Apostles showed that the apostles were changed in that moment to come out of hiding and go the ends of the earth to spread the good news of God.   We find that in the history of the Church Confirmation was within the Sacrament of Baptism. After the water and laying on of hands there was the anointing with oil and sealing of the Holy Spirit within that person.  These Baptisms were for adults until the 2nd century when the infant baptisms began. The practice of adults’ baptism was by the Bishop during the Easter Vigil. When infant baptisms began they were separated from the Easter Vigil and the Bishop was not present for them. The parents were held responsible to complete the Baptism by seeking out the Bishop to seal the baby with the Holy Spirit. Many parents would not go to such effort.

During the 9th Century Charlemagne tried to unify the Church and the Holy Roman Empire. The Bishops feared the elimination of their position and in an attempt to display their importance they found early teachings of a French Bishop named Faust in the 6th Century. He asserted that it was not enough to be baptized but that the Bishops needed to be the only one to seal the person with the Holy Spirit making them soldiers for Christ; making the sealing of the Holy Spirit: Confirmation into its own sacrament. These 9th Century bishops took these teaching and blatantly forged that a Pope declared that after Baptism a Catholic should be confirmed by a Bishop. Charlemagne and his people believed them. It was put into action and became a tradition.  This was by far the biggest surprise about the history of Confirmation; that it came from a falsehood.

I believe that the Holy Spirit is the movement of God through our lives and our actions here on earth. I have experienced the Holy Spirit in the simplest appreciation of nature to life changing decisions that made absolutely no logical sense other than God was guiding me through the actions of the Holy Spirit.  The sacrament is not only to confirm you in the faith but to send you out into the world as a Catholic with the seal of the Holy Spirit upon your soul moving you to action on God’s behalf.

The sacrament has undergone some changes in my lifetime. When it was moved into childhood I don’t think that children really understood the purpose of it. Then it was moved to around 8th grade graduation which made it seem as though it was an exiting sacrament. In our parish 7th graders are confirmed so that it is no longer paired with graduation. We also like to see them live out the working of the Holy Spirit through their continuation of service and leadership of the school. I do believe it has become a sacrament that our young teens take very seriously. They know they can choose to not be Catholic. In the past parents could push their child through this sacrament. Now, much is being done to make sure that it is the teen’s choice not the parent’s.

The Holy Spirit given to us by God should move and shake us to our core. We should try to recognize the presence of that which shifts our thinking, our being and our acting. Jesus said I will be with you always. I think he meant through the Holy Spirit.  We should take the time to look for the Holy Spirit in our every day lives. 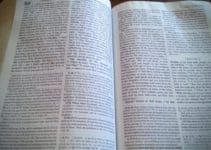 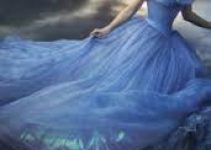 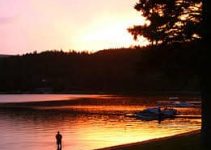