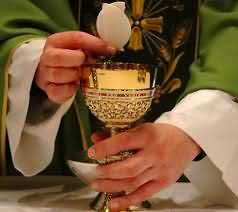 Kathleen Chesto discusses the sacrament of Eucharist by starting with the root of the Eucharist “Take it; this is my body.” Then he took the cup, gave thanks, and gave it to them, and they all drank from it. He said to them, “This is my blood of the covenant, which will be shed for many.” – Mark 14:22 -24.

The ritual of the Eucharist was shaped by history. It was through the breaking of the bread that the apostles were able to recognize Christ after His Resurrection. As the Church began early Christians would meet together in homes bringing food for a meal. The head of the household would bless the food and the people would eat together and tell stories. Eventually when great numbers were added to the Church and the Christianity became the religion of the Roman Empire the meal was taken out of homes and brought into great halls and basilicas to accommodate the new Christians. A person was in charge of the gathering usually the Bishop and eventually the priest. Coming together was about the presence of Jesus Christ in the community through the telling of the stories of Jesus, through the breaking of the bread and through the gathering. Hersey was the catalyst that changed the way we now see the Eucharist. While these changes were taking place in the 4th century the Church was attacked by a heresy claiming that Jesus was not God. This led the church to call the Council of Nicea. At this time the Eucharist became known as a work of the people.   The heresy of the 11th century denying the physical presence of Christ in the Eucharist led to the emphasis of the divinity of Christ. The people of the Church became unworthy and the center of our gathering changed from community to the Eucharist. The people were so unworthy to receive Christ that communion rails were installed, bells were rung at the time of consecration and people were divided from the Eucharist.

The ritual of the Mass remained frozen in time from 1563 AD at the Council of Trent until the Second Vatican Council in 1963. Vatican II attempted to restore the original understanding of the Eucharist. The communion rails were taken down, the priest turned around, the people were no longer to be spectators but instead active participants in the community of Church. The language of the country would now be spoken instead of the dead language of Latin. The Church was trying to be what the early Church was creating, community that loves one another and Christ in Thanksgiving with God.

Before Vatican II it was said that the greatest strength of the Church was that it was universal. A Catholic person could attend Mass anywhere in the world and hear the exact same Mass, language, gestures and readings. The greatest weakness was the same thing. Instead of the Church being “Church” in community, it was now a person we could not hear, understand or really see up front talking to God without us. Turning it all around pulled us as Catholics away from a relationship with God alone to finding God in community – true Church.

Eucharist is a mystery of faith. It’s faith that leads us to believe we consume Jesus Christ and it’s also faith which develops a deeper relationship with God in our personal prayer life and our life with our Church. I believe that each part of the Mass is very instrumental in our growth of our faith life, Eucharist is an intimate part but it cannot be the only part. If it is we have missed the message of the Gospel. It is not to be at Mass every morning to be with Christ. It is to take Christ through word and sacrament into the world and to live our lives the way Christ taught us loving one another without condition. 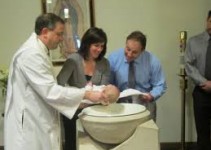 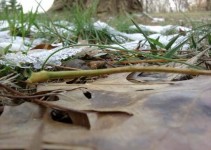 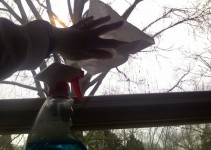