Lori Hadorn-Disselkamp and Jennifer Schiller may be a perfect match as business and ministry partners. Hadorn-Disselkamp is kinetic; she makes the Energizer Bunny look like a slacker. Schiller, a licensed marriage and family therapist and a pastoral counselor, is a calming counterbalance to the excitement and effervescence her friend brings to the table.

They’ve known each other for a few years through St. Bernard Parish. Jenny Schiller has served as a parish and school counselor there, and Lori Hadorn-Disselkamp was a little bit of everything — a room mother, the organizer of a successful school-wide recycling program and, in recent years, the creator and writer behind the “Faith Filled Mom” web site.

Together they’ve created “Faith Filled Mom Retreats,” a six-hour pause in the ragged routine of motherhood that allows moms throughout the Archdiocese of Louisville to slow down, take a break “and remember why they wanted to be moms in the first place,” Hadorn-Disselkamp explained.

With songs devoted to moms and even a “Hallmark moment” holiday to honor mothers each spring, it might be difficult to imagine that moms can be taken for granted. Until you ask one. Working women everywhere — including Hadorn-Disselkamp and Schiller — can tell you that moms get blocked from sight by piles of laundry, loads of dirty dishes or unfinshed meals.

They still get thought of as maids or cooks or chauffeurs — as well as wage earners — because they’re wearing so many hats in modern society. Those roles — all that multi-tasking, their hectic be-everything-to-everybody lifestyle, — is what led the pair of friends from St. Bernard to consider creating a retreat just for moms.

Hadorn-Disselkamp has four children ages five to 11; Schiller’s children range in age from 17 to 30. Between the two of them, they’ve experienced the panoply of pressures all mothers face during the various phases of raising children and managing homes.

They know how complicated lives can get; know how daunting a daily routine can become. Throw in an ear infection here or there, a snow day or two in the middle of winter, a problem with math class, dating trauma — you name it — and a mother’s life becomes as stressful as any chief executive officer’s west of Wall Street.

The first one was held earlier this year without a lot of attention or a lot of fanfare. Still, 25 moms attended, and “we had an overwhelmingly positive response,” Hadorn-Disselkamp said.

“It was encouraging to hear that everybody thought the retreat was outstanding,” she added, “and several people said ‘we’ll come to anything else you guys do.’ ”

So they’re planning three more “Faith Filled Mom Retreats” — Feb. 26, March 19 and April 9. They’ll all be held at Gingerwoods, a retreat center at 7611 Rose Island Road in Prospect, Ky. “It’s far enough that you feel like you’re getting out of town a bit,” Schiller said, “but still close enough to be convenient.”

“Available but apart,” said Hadorn-Disselkamp. Her husband Aaron and Schiller’s husband Richard both support the retreat efforts of their spouses.

And the pair are also planning a retreat for a parish in Hopkinsville, Ky., near Fort Campbell, the U.S. Army base that has borne more than its share of casualties from the war in Afghanistan.

The idea behind the retreats is straightforward, its leaders explained.

“We want to teach stress management skills, want to emphasize the importance of daily prayer and want to provide people — moms — with practical skills to cope with their lives and get closer to God,” Hadorn-Disselkamp said. “We know what they’re feeling; we’ve been there ourselves.”

Schiller and Hadorn-Disselkamp both feel the hand of Providence guiding their efforts.

“We know there is a community of moms just waiting to be formed, to be brought together,” Schiller said. “We know how isolated moms can feel. They rush to get the kids off the school; they rush off to work themselves, rush home to get dinner, rush to do laundry, rush to get the kids bathed and to bed.  It can be overwhelming.”

So the Faith Filled Mom Retreats allow mothers to take a few deep breaths and relax a bit.  The events are just one day — from 9 a.m. to 3 p.m. “That gives them the rest of their Saturdays to get other things done or to continue to relax,” Hadorn-Disselkamp said.

The cost is $65, which includes a continental breakfast and a full lunch, and the pair is open and willing to plan retreats for individual parishes, too.

“Our retreats are for grandmothers, too,” Hadorn-Disselkamp noted. “We have a wide range of experience between the two of us, and with God’s guidance, we want to let people know there are ways of dealing with all the stress and demands. We emphasize that motherhood never ends.”

Use mold killers that work! 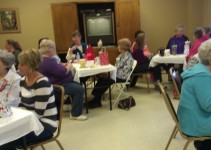